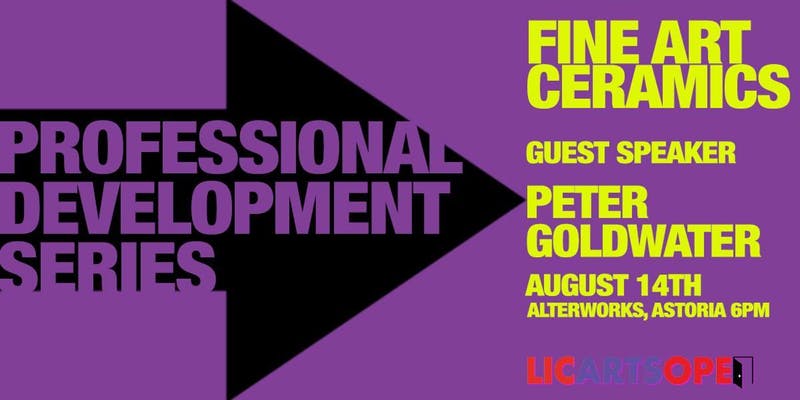 About this Event: LIC Arts Open presents “Professional Development Series” as a series of workshops for the public to think and learn about being an artist. Please note that the talks are free but a donation of $5 for the speaker is suggested.

LIC Arts Open is proud to present the Professional Development Series. The idea behind creating the Professional Development Series was to create a series of workshops similar to TED Talks as LIC Arts Open’s way to give back to the community. Each workshop will have a guest speaker come and discuss a specific topic, providing information and insight from the speaker’s own experiences for others. We plan to present a new workshop every second Wednesday night of the month. There is a suggested donation of $5, which will go to the speaker of the night, and be RSVP only with limited spots available.

Our second workshop takes place at Alterworks Studios in Astoria and our Guest Speaker is Sculptor Peter Goldwater who is also an instructor at the wonderful Brickhouse Ceramics space in LIC. Peter’s is an accomplished potter but he regards his work as sculpture and this becomes apparent when you see his body of work. In this talk Peter will discuss the essential differences between ceramics that are primarily functional and what sets certain work as fine art ceramics.

Alterworks Studios is wonderful facility at 30-09 35th Ave, Long Island City, NY 11106 which has a communal working space and micro studios with a kiln in the basement. Many Thanks to Tina Stipanovich and Alterworks Studios.

Subscribe to our Newsletter and get the latest info from our upcoming events and art exhibitions.